Union Street was defined and developed with a clear purpose, which enabled it to become a unique London destination with a real sense of purpose by bringing performance, art and crafted food and beverage to the heart of its community.

These dilapidated railway arches on the ‘Low Line’ in London SE1 were being utilised for storage with one arch housing the Union Street Theatre. They required major refurbishment work to bring them up to current accommodation standards. Existing tenants were served notice to quit by Network Rail, who intended to convert the arches into office space relocating the existing tenants, however a storm arose as the Theatre had several politically connected patrons.

We were therefore asked to investigate and report on viable new use opportunities which would retain the theatre at the heart of the place development Union Street sits adjacent to the bourgeoning Southbank, research demonstrated centuries of arts, entertainment and craft manufacturing in the area.

Dialogue with local resident and business groups led to a key opportunity being identified, to develop a new place identity for the arches around the premise of bringing …“Arts, Performance and Artisan food and drink to the Heart of the Union Street Community.”

The stage was set and a series of flexible place identity elements devised to bring the place to life as a destination housing a diverse range of businesses. 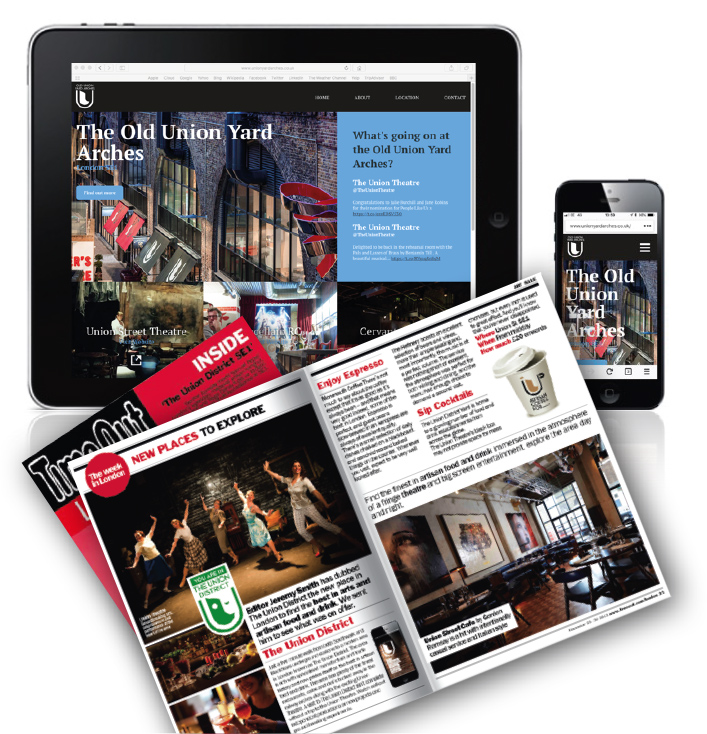 The digital and printed marketing materials reflect the high quality place intent and aim to demonstrate the arts and crafted positioning and attract the right type of operator to the scheme. 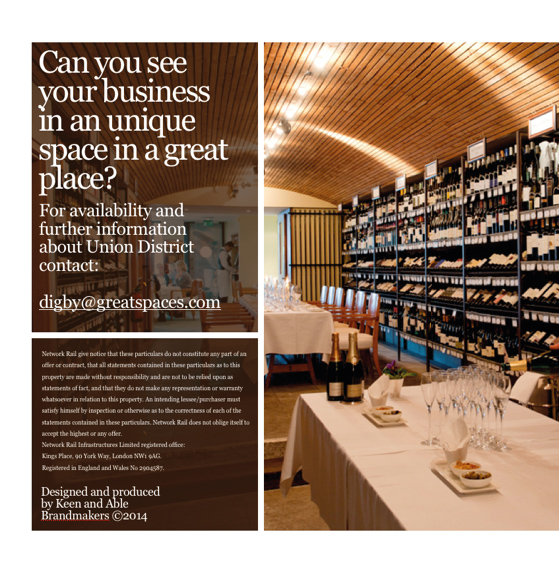 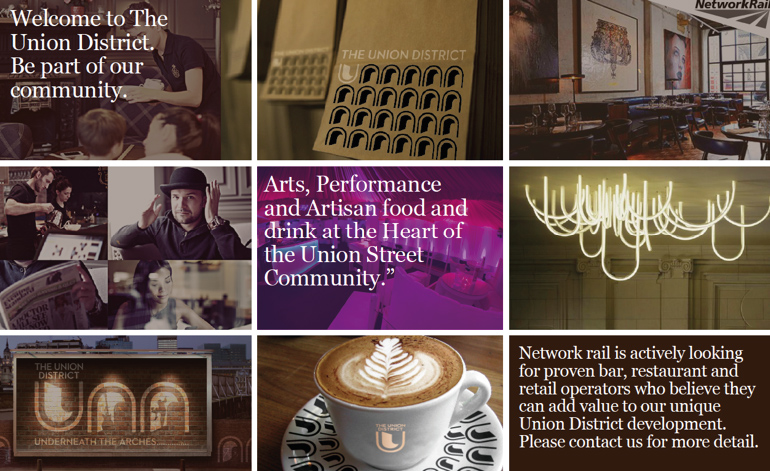 Hand crafted signage saw the the brand identity introduced in 2D and 3D elements, an artwork installation was also commissioned from Rachel Wilberforce to introduce a landmark element to the scheme. 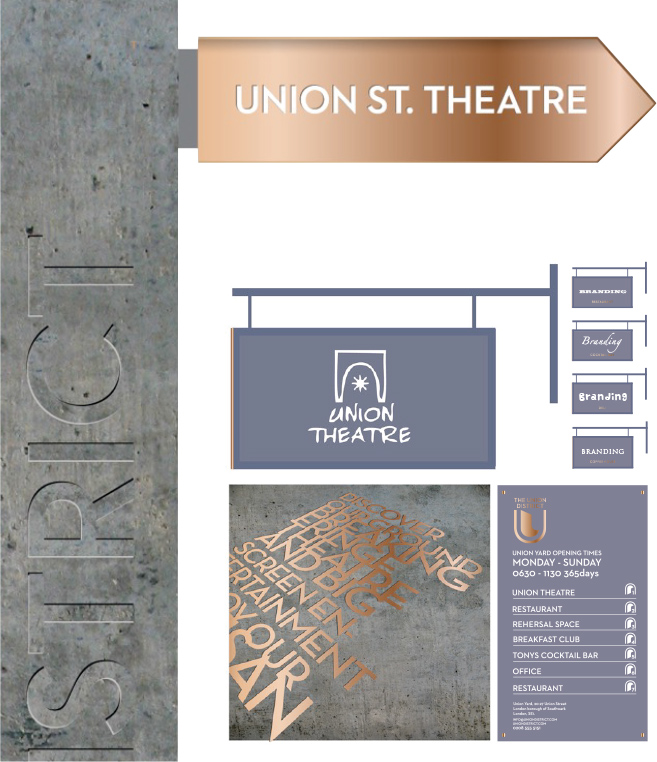 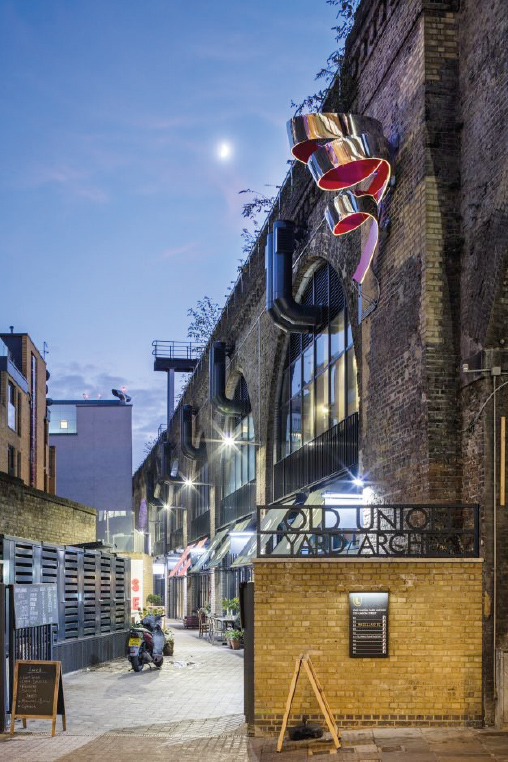 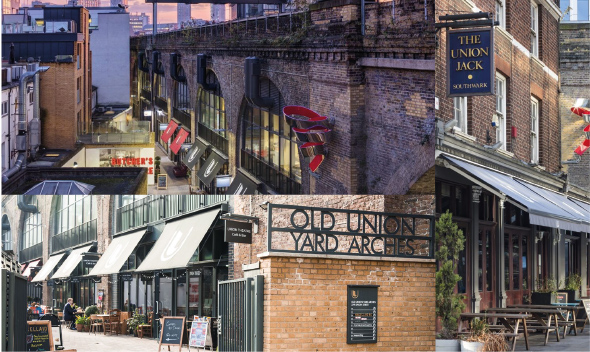 Seen as benchmark place enhancement scheme by the Network Rail. Buy in from ‘Better Bankside’ for the environmental design saw a GLA grant awarded and further enhancement of the surrounding streetscape encouraging further, independent arts, performance, food and beverage operators to Union Street and the adjacent areas. 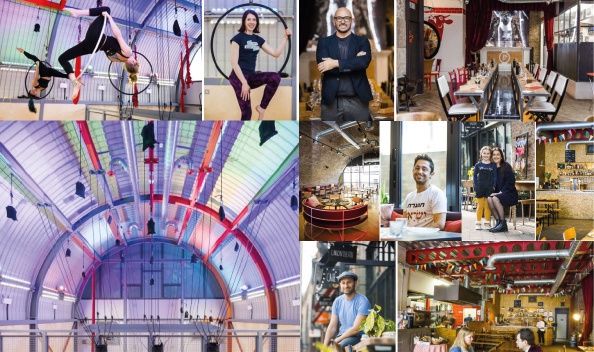 Donald Hyslop, Chair of Better Bankside said: “The opening of the Old Union Yard Arches signals another step towards realising the Low Line vision in Bankside. The regeneration of these renowned viaducts has been significant and is key in stimulating the further regeneration and development of the wider area.

We use cookies to ensure that we give you the best experience on our website. If you continue to use this site we will assume that you are happy with it.Ok